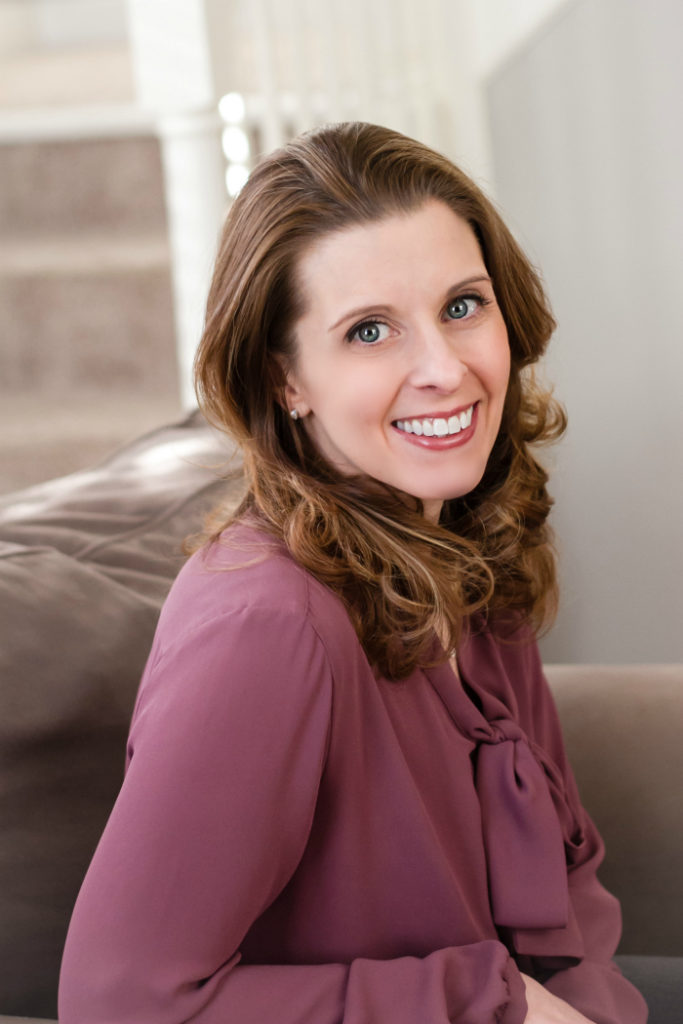 I’ve always been a classic overachiever.

It started early, led me to three college degrees, lots of certifications and career milestones. I’m a visionary with thousands of ideas, but I’m an implementer who knows what it takes to turn them into a reality.

I love a good challenge. I love good people even more. 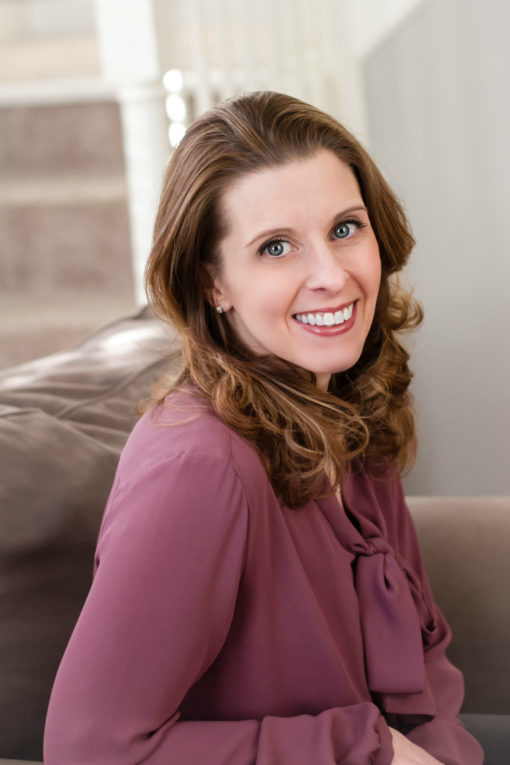 Who is Nora Sudduth?

She helps business owners launch and scale businesses with her Flagship FormulaTM and Success Retention MethodTM. She’ll help you identify your proprietary framework, process, method or system that helps your clients get results, then help create the programs to support them, and the marketing to sell it.

Having a proprietary flagship framework is your best competitive advantage in today's crowded markets.

If you want to build a long term business, you need to support your client’s long term success. 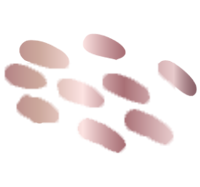 But really, what's your story?

For six years I spent my morning commute to work counting yellow school buses. My daughter had been obsessed with them since she was tall enough to see out the backseat passenger window.

I honestly didn’t understand her fascination with them. To me, school buses were slow, smelled like somebody’s abandoned gym locker and weren’t very safe (our school system’s buses didn’t have seat belts). There was no denying how her face lit up whenever she saw one though, so we made it a game to excitedly point them out and count them on the way to drop her off at daycare.

My daughter’s interest in yellow school buses didn’t wane by the time she started elementary school. In fact, the obsession only grew stronger. Every day she begged and pleaded to take that yellow school bus home, and every day I had to say no. I spent my workday in a corporate office until 5:30 p.m. or later. I was never home when the bus would have dropped her off after school.

This went on for several years. By that time in my life, I had spent 15 years investing myself in a six-figure corporate career. By every measure of my non-entrepreneurial family and friends, it was a very successful career. I had taken the traditional path I was supposed to, the path I was told was the defacto standard of success.

Yes, I followed the progression of bachelor’s degree, master’s degree and MBA right on up the corporate ladder. But instead of feeling a sense of achievement and happiness, every rung up the ladder only seemed to take me one step further away from who I really was and what (and who) I truly loved.

The truth was, my corporate job left me feeling stressed and empty. As a way to cope, I became an addict, but not to drugs or alcohol. No, I was addicted to buying domain names. I bought hundreds of domains, and I spent hours dreaming up ways I could use them.

I was dissatisfied with my job, and I found myself I spending more and more time doing something I did enjoy – digital marketing. Late nights and early mornings were spent helping everyone I could grow their businesses online.

I spent more and more time trying to balance it all, trying to maintain the corporate life and still feed my creativity and professional drive. I stopped sleeping and consumed far too much caffeine. Thankfully, somewhere in the middle of that I found my momentum and the spark my life had been missing. Digital marketing was my “yellow school bus”.

Digital marketing brought me joy, and I realized it was something I wanted to do every day. But how could I leave a six-figure job without putting my family or my finances at risk? I didn’t yet have the courage to follow a non-traditional career path. I didn’t know if I ever would.

I’ll never forget the day that all changed. It was just another normal day at work. I was in the middle of another waste-of-time morning meeting. As usual, I took out my phone and bought another two domains, fthemeeting.com and fthejob.com. For a moment I just sat there, staring through the people around me. How did I get here? I wondered. How have I ended up feeling so empty and disconnected from the life I really want to live?

In that moment, I knew I needed a change, and I made up my mind. I couldn’t keep doing what I was doing. Although I wasn’t yet sure how it would look or what I would do, there was one thing I did know:  my daughter was riding that yellow school bus home today.

I left work early that day, early enough to meet my daughter as she stepped off the bus at the bus stop.  I took a picture of her the moment she stepped off that yellow school bus and captured her running full speed towards me, smile as wide as a mile, hair streaming behind her. My daughter’s dream had come true. 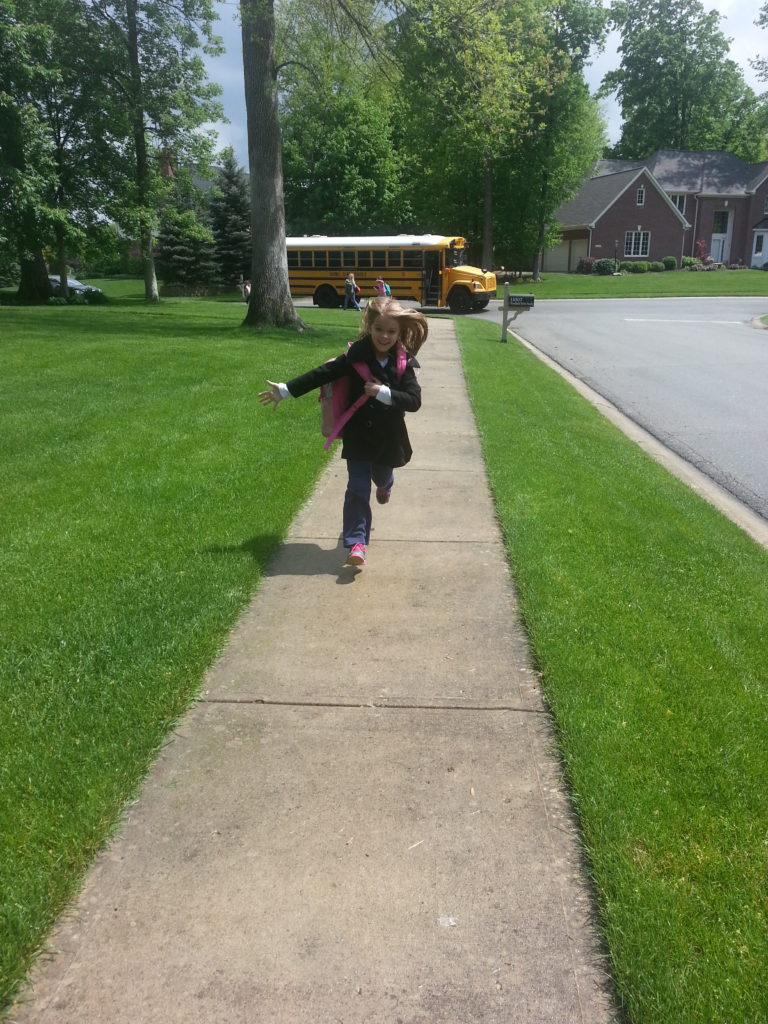 In that moment I knew two things:  my little girl needed to take the bus home more often, and I needed to find that kind of joy in my own work. My daughter’s relentless dedication to pursuing what she wanted and her joy upon receiving it gave me the boost of confidence I needed to go after my “yellow school bus”. It was time for me to create a life where I could spend time doing what I love while serving people I love.

It wasn’t easy, but I was relentless, and I shared the entire journey with my kids.

There were moments when voices of doubt chanted inside my head. I didn’t hide that from them. If I got knocked down, they saw it, and they were there when I got back up again.

I shared the victories and the wins right along with the battles and defeats. I shared the lessons learned and the things that kept me going. I shared my fears and how I worked past them. I even shared the tears and the lack of sleep.

I wanted my kids to understand the importance of holding on, digging in, and giving something everything they have even if they’re not sure it will work out.

I wanted my kids to understand that the reality of the journey to achieving something that’s really important to you isn’t paved with sunshine and butterflies. Unicorns and leprechauns aren’t going to show up with pots of gold, and a genie in a bottle isn’t going to appear and grant three wishes.

I wanted my kids to understand the importance of relationships. Sharing the journey with them not only forged a very special bond among us, but they were able to watch me develop very special bonds with clients, mentors, and friends.

Through it all, I let my kids see me hustle, let them experience determination and perseverance in action. They were there every step of the way.

I chased my “yellow school bus” dream, and I built a six-figure marketing agency in less than a year and retired from the corporate life. The first day I stayed home, I met my daughter at the bus stop again. I took another picture so I’d always remember that moment. 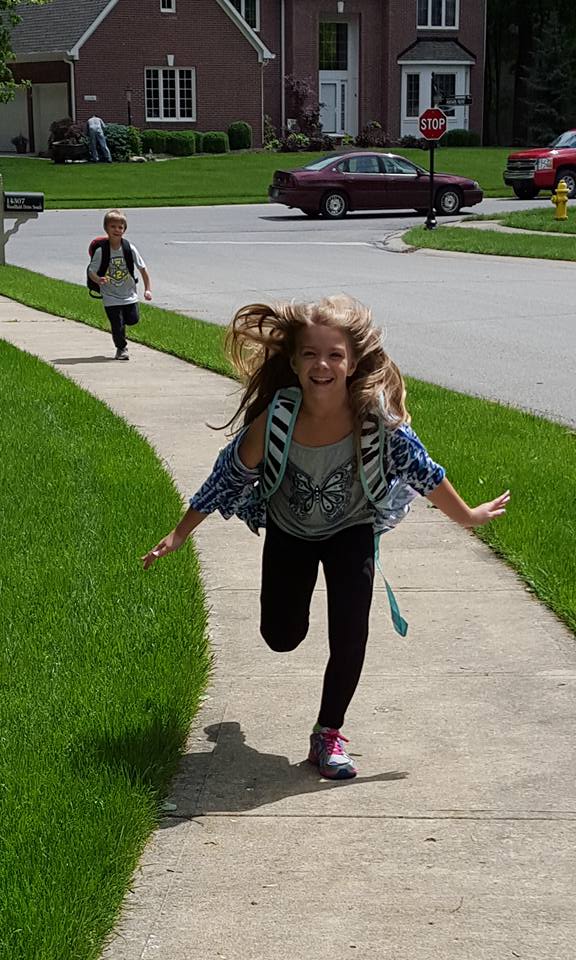 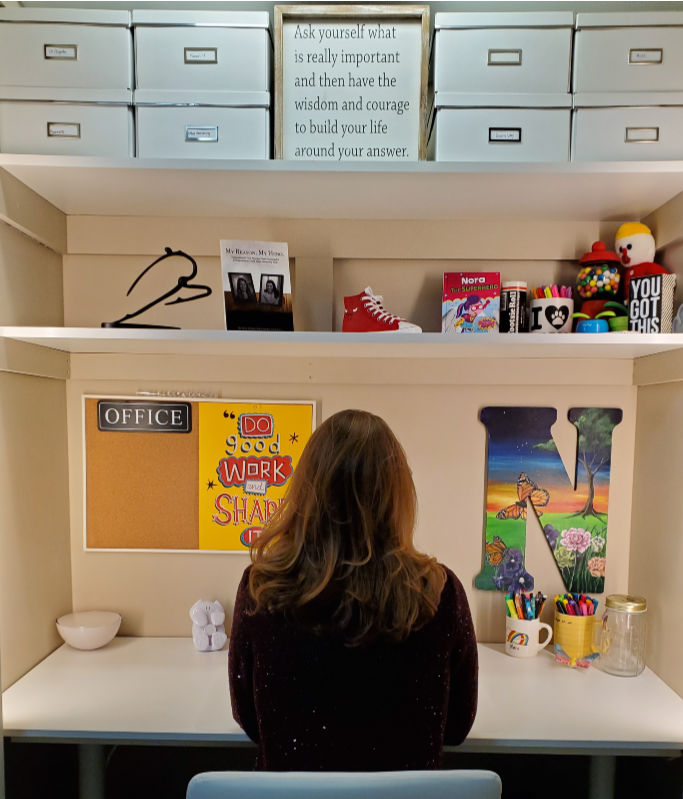 Russell Brunson, CEO of ClickFunnels, had heard of the success our marketing consultancy was having using his software and I stepped away from consulting to create two 7-figure training and coaching programs his company. I created and ran the ClickFunnels Certified Partner program and created the ClickFunnels ClickStart coaching program that was responsible for helping thousands of businesses create sales funnels.

Over my career I’ve created training, coaching programs and marketing responsible for over $500M and most importantly, I love it.

I’ve had the honor of helping hundreds of amazing, inspired entrepreneurs, startups and Fortune 500 companies to create and sell their flagship programs, to create systems that scale, systems that sell and most importantly, enable their own customers to have success.

I don’t work with “get rich quick” clients who want to reap all the rewards without putting in the work. I don’t work with people who don’t truly care about their customer’s success, or “faux experts” who skip steps in the process…like actually doing the thing they’re telling other people to do… 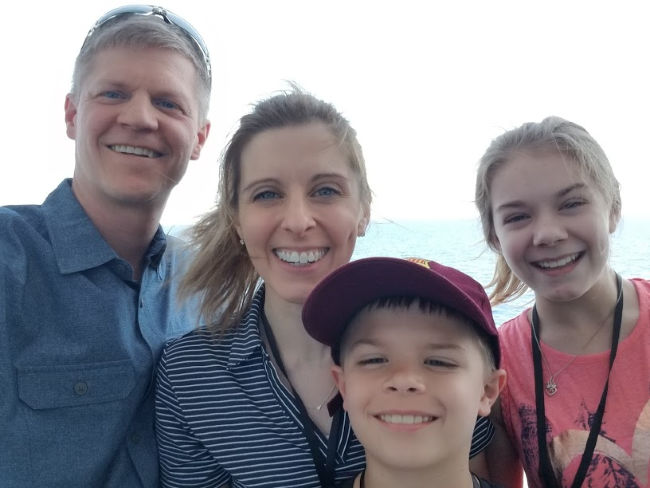 As adopted kiddo who almost didn’t have a family, my family means everything to me.  If I’m not working, I’m probably spending time with them.

I have two beautiful, amazing humans that call me Mom and you’ll find me cheering them on from the soccer sidelines or in music performances….or driving them back and forth to practices.

All four of us have our first degree black belts in Taekwondo, we approach decorating for Halloween like a competitive sport, but always maintain a solid sense of humor about everything.

I do schedule work around family, it’s just that important to me. I missed too many moments working the traditional 8-5 job and I’ve created this life where I no longer need to miss any of it.

We also have three furry members of our family – a brother & sister pit-bull bonded pair and an indoor cat (who I’m highly allergic to …and he knows it).

Nora Sudduth is an award winning sales strategist and creator of the Flagship FormulaTM. Nora is a program design and marketing strategist, coach and consultant. Nora has helped hundreds of business owners create their business strategies and marketing plans for accelerated growth online. Nora specializes in designing training, coaching and certification programs to support client success.

Prior to launching her own business, Nora spent over 15 years helping startups and corporations develop systems that scale. She specialized in SaaS customer success program development with her Success Retention MethodTM. She earned her Bachelors in Computer Science and her Masters in Engineering Psychology from the University of Illinois Urbana-Champaign. She also earned her MBA from Indiana University’s Kelley School of Business.

Nora left her corporate career in 2015 to launch her own consultancy and currently lives in Carmel, Indiana with her husband and two children. 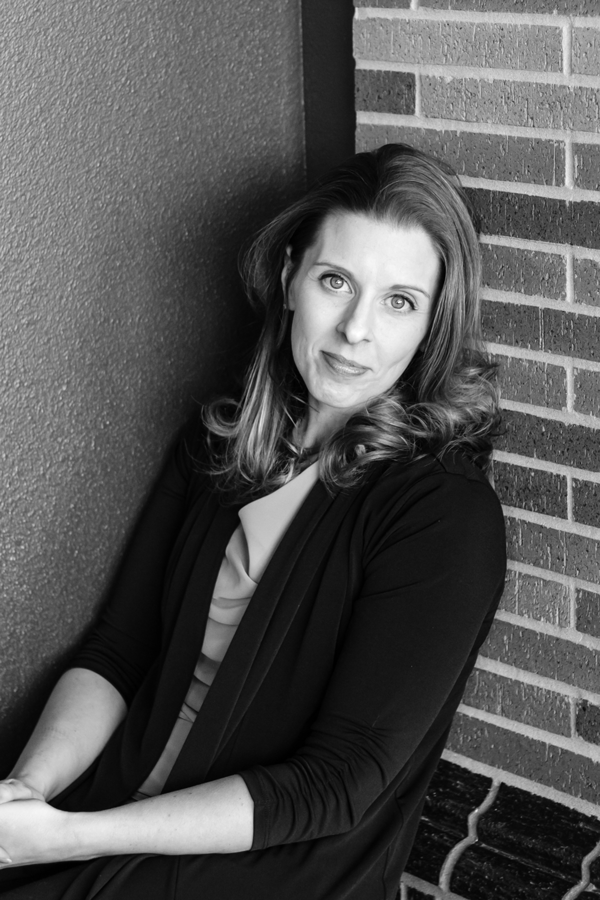 Don't be afraid to take the next step, especially

Any cookies that may not be particularly necessary for the website to function and is used specifically to collect user personal data via analytics, ads, other embedded contents are termed as non-necessary cookies. It is mandatory to procure user consent prior to running these cookies on your website.